The sound of an exhaust system is a personal taste. Here is my experience with my 280z:

The sound was great at idle and rumbled like a V8 at 10mph when passing pedestrians. It actually set off car alarms in vans.

Unfortunately the system droned so loudly between 2600rpm and 3000rpm that it was unbearable.

I had a 2.5" resonator installed. It cured the drone problem and quieted the exhaust but it killed performance.

It was not until a year later when I had to cut the pipe aft of the resonator to do suspension work that I saw the problem. The resonator had a huge restriction! 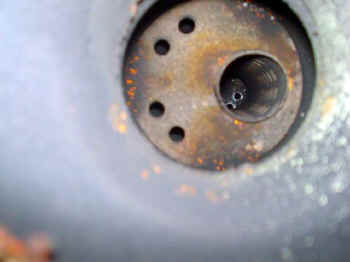 Driving with just the resonator was very cool though. The car sounded terrific and mean. Especially at high rpms. Just like those cool road racers in the 60's at Monza.

The final mod was to put a glass pack on the car. I chose a Dynomax stainless steel unit with stainless steel packing. It has a full 2.5" restriction-less pass-through that flows well.
It is mounted just aft of the collector header. Dyno max make a 12" and 18" unit. Part numbers are 24215 and 24236 respectively. I went with the 18" unit.

Now the car has a low tone that is rich but not boomy or loud. It is great and I have had a few complements.

Thanks again for your advice.

I went down to Billy Jack's muffler shop, he is a genuine country boy and 1960's drag racer and told him what I wanted, and to use his judgement.  He put in a 12 inch glass pack at the transmission tunnel and a 6x9 oval dynomax clone with an 3 inch diameter chrome tip with rolled outer lip on tip (8 inch long chrome tip.) The rear oval is only about 12 inches long to fit space nice. Anyway, runs strong, sounds good, looks very good.
Actually, the main noise area now is from under the hood with the MSA header and semi-race MSA Schneider cam kit. So--mission accomplished and I am out only $67--remember this is Oklahoma and a small  town.
Thank you! I eliminated the cat ,and a really restricted cat back exhaust OEM set-up. I have a shaved p90 head that was pro ported with stainless race valves, MSA cam and ceramic coated header. I also have the turbo AFM and 60mm 240sx throttle body but have not installed yet--still breaking in engine. It starts pulling good at 3000 rpm. In hindsight maybe I should have gone turbo, but I wanted a jag style sports car and sound --I got what I wanted.
Putting that engine together took me months of spare time, about half to clean parts, and study up.
I used zcar.com a lot and appreciate your comments, and others like the z doctor, tony d and mr. 3.1 stroker.

By the way, I gave you feed back on your O2 bung question under "thorfin" and this was true info if you can use it. Also, I did not understand the picture response you posted tonight, but I liked it a lot.